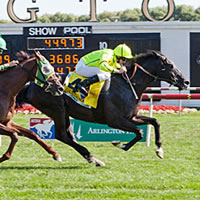 Having his first run for ATB’s UK trainer Marco Botti and beautifully ridden by world class jockey Ryan Moore, Dandino will now head to Melbourne on Grand Final week to prepare for the Caulfield & Melbourne Cups.

Liz was interviewed by her husband Darren Dance for ATB-TV upon returning to Australia and she was full of praise for the promising stayer.

Visit the ATBloodstock you tube page for ATB-TV featuring Dandino.

For more information regarding the outstanding win of Dandino at Chicago read this article at the ATB website.