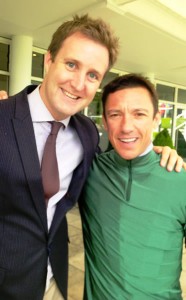 Dean Elliott is the Business Development Manager for William Hill Australia, in which he handles the Centrebet and Sportingbet brands.

Dean grew up in Geelong and has a background in racing, working at Lindsay Park Stud (now Cornerstone Stud) from 2006-2012 in Marketing and Bloodstock, which also included a stint with Belmont Bloodstock Agency.

He hails from a family of racing enthusiasts; father Trevor was a rails bookmaker in Melbourne during the 1980’s and through the 90’s, at which point his passion for racing and bloodstock was born.

Dean’s love…or should we say Empathy in thoroughbreds stems from such factors as his coarse skin, his girlfriend trying to turn him into a Vegan, a constitution similar to an unraced 5 year-old, and the voice of a Shetland pony (a little hoarse).

Dean’s shares his breeding and racing thoughts with Horse Racing Shares when time permits, and his racing knowledge is second to none.

Dean can be found on Twitter under the handle @DeanElliott3