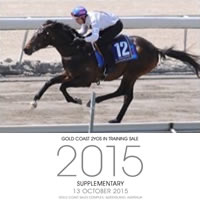 Three colts broke ten seconds during a successful breeze up session of youngsters on the eve of the 2015 Magic Millions Gold Coast 2YOs in Training Sale.

Juvenile colts by Ready’s Image (9.84 seconds), Captain Sonador (9.89 seconds) and More Than Ready (9.95 seconds) all ran sub 10 seconds and looked potential stars of the future when they went through their paces and were timed over 200 metres today at the Gold Coast Turf Club.

The Ready’s Image colt, catalogued as Lot 12 and a member of the Attunga Stud draft, is a half brother to the Singapore based group winner Tenzing and the NT Derby winner Flying Tormenta.

The second of the sub-10 colts today was the Captain Sonador colt from Kenmore Lodge. He is the second foal of an unraced Holy Roman Emperor mare and hails from the family of Gold Nugget winner Tyrannic.

During today’s session some 37 of the 62 lots breezing ran sub-11 times in a great pointer toward tomorrow’s sale.

Any two-year-old offered through the Magic Millions sale ring tomorrow which is nominated to the Race Series holds a first entry in the $2m Jeep Magic Millions 2YO Classic run on 9 January 2016.

To view the pedigrees, breeze up times and videos and photos click here.