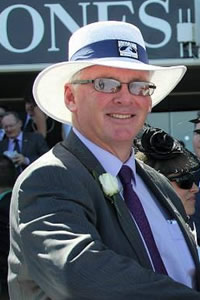 Darren Dance is the owner of Australian Thoroughbred Bloodstock (ATB) and is known in the racing industry for his honesty, integrity, and eye for a good horse, not to mention his warped sense of humour.

Darren, along with his wife Liz, established ATB in 1997 and their Stud and Agistment property is based at Manningtree Park at Beremboke in Central Victoria.

Manningtree Park is a 24/7 job and both Darren & Liz live for their horses, their staff, and their owners.

Darren is a hard man to pin down at the best of times, as he is always on the go, whether it be transporting ATB horses to the pretrainers, heading to the races with his owners, or feeding his agisted horses.

More often than not you’ll find him on his mobile phone trying to buy that next horse for his faithful band of owners.

‘Double Dee’, as he is affectionately known, has found the time to share his ‘racing’ thoughts with Horse Racing Shares, generally when he is on a long return trip from moving ATB horses around the state.

Darren’s insight into to the world of racehorse syndication is enlightening, because when it comes to syndicating racehorses, nobody does it better than ATB!

ATB can be found on Twitter under the handle @ATBloodstock