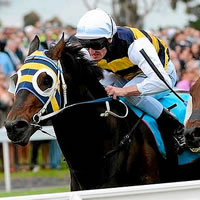 A field of 13 will contest the 2014 Geelong Cup this Wednesday at Geelong.

Other feature races on Cup day include the Emsley Lodge Racing Geelong Classic (2200m) for three-year-olds on their way to the Victoria Derby at Flemington and the Winter & Taylor Isuzu Black Pearl Classic (1200m) for fillies & mares.

Contact the Geelong Racing Club on (03) 5229 4414 for all ticketing & dining options or visit the GRC website for more info.