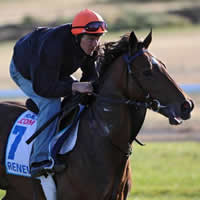 Formerly in the stable of UK based trainer Marco Botti, Renew travelled to Australia with former stablemates Dandino, Seismos & Guest Of Honour on AFL Grand Final Day and was situated at the Werribee Quarantine Centre.

His first Australian start was on Caulfield Guineas day last Saturday where he was well beaten in the Group 2 Herbert Power Stakes, finishing almost 12 lengths from the winner Big Memory.

OTI Racing, principally Terry Henderson and Simon O’Donnell, imported the horse with the Melbourne Cup in mind, and Renew headed to the Ballarat stables of Alexander on Monday following his disappointing Herbert Power run.

The move from Werribee to the country environment at Ballarat appears to have done the trick with Renew a much happier horse according to his new trainer.

“He wasn’t happy within himself,” Alexander said.

“Coming here was all about a change of scenery. He’s loving it.”

Renew was 4th emergency for the 2014 Caulfield Cup and the chances of the 5yo getting a run appeared very remote following the barrier draw on Monday.

However, the unlikely scratchings of former stablemate Dandino, Japanese galloper Bande, along with Gris Caro and Dear Demi in the past two days, meant Renew would gain a start in a Group 1 race less than a week after entering Alexander’s stables.

It’s a remarkable effort for the relatively new trainer who only gained his licence this season.

Renew will be only Alexander’s eighth runner in a race, and now he’s off to the Caulfield Cup with a starter in Australia’s second biggest staying race of the spring, second only to the Melbourne Cup on the first Tuesday in November.

“You don’t get many chances like this,” Alexander said.

“Ï know he’s an outsider, but this is what you dream of, having a runner in a race like this.”

“We didn’t expect to be there.”

Apprentice jockey Regan Bayliss will be aboard Renew, who will jump from gate two alongside another former stablemate in Seismos.

Seismos also has a Ballarat connection with a number of local racing enthusiasts in syndicates with Darren & Liz Dance and Australian Thoroughbred Bloodstock.

There will be plenty of drinks flowing in Ballarat on Saturday night if either Renew or Seismos can take home the Caulfield Cup.